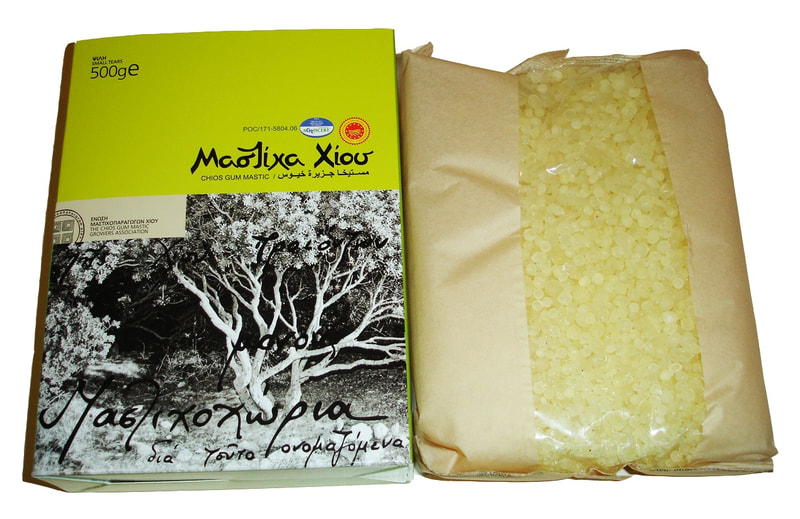 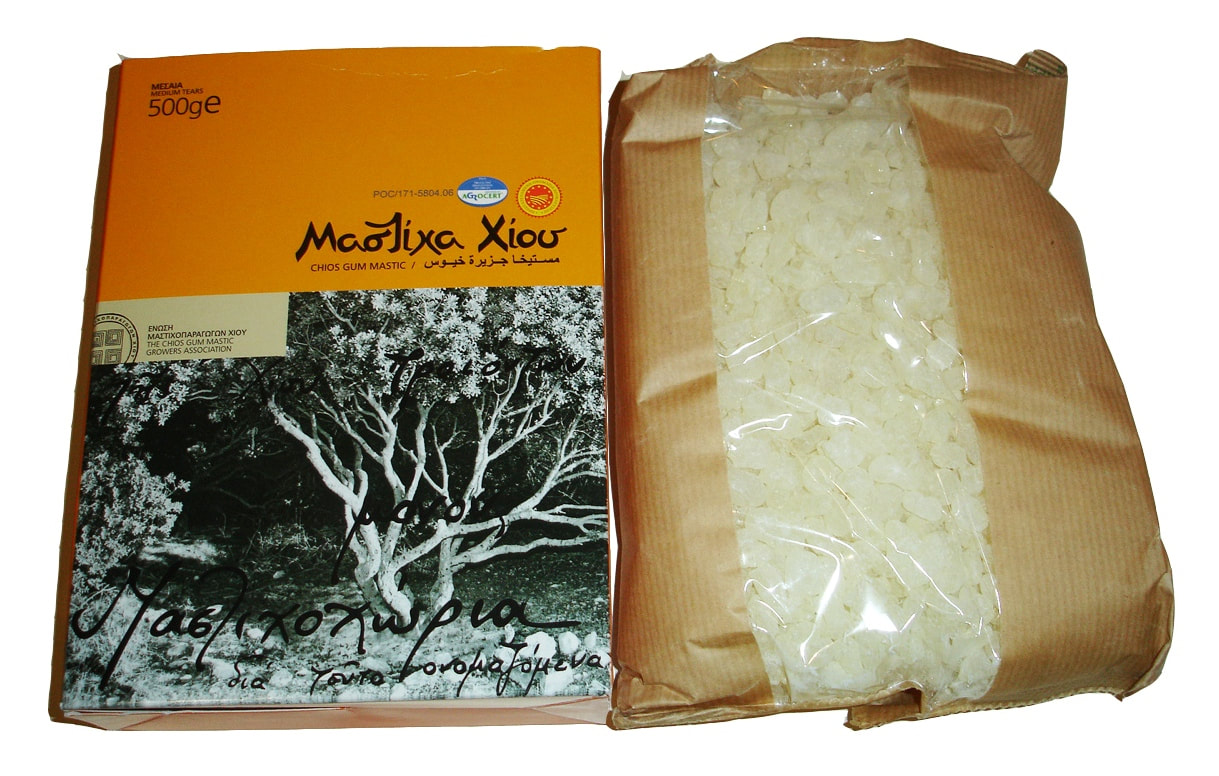 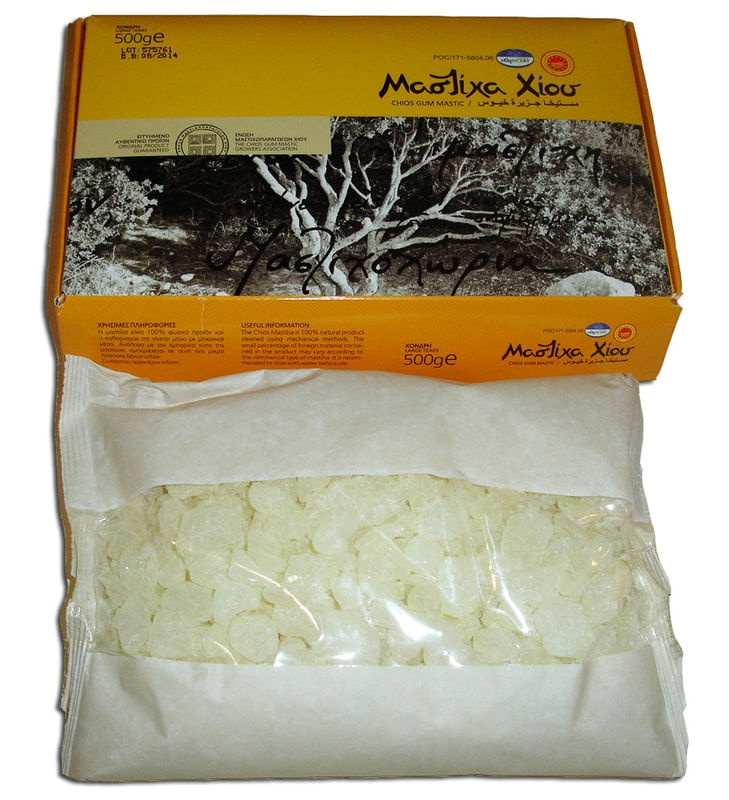 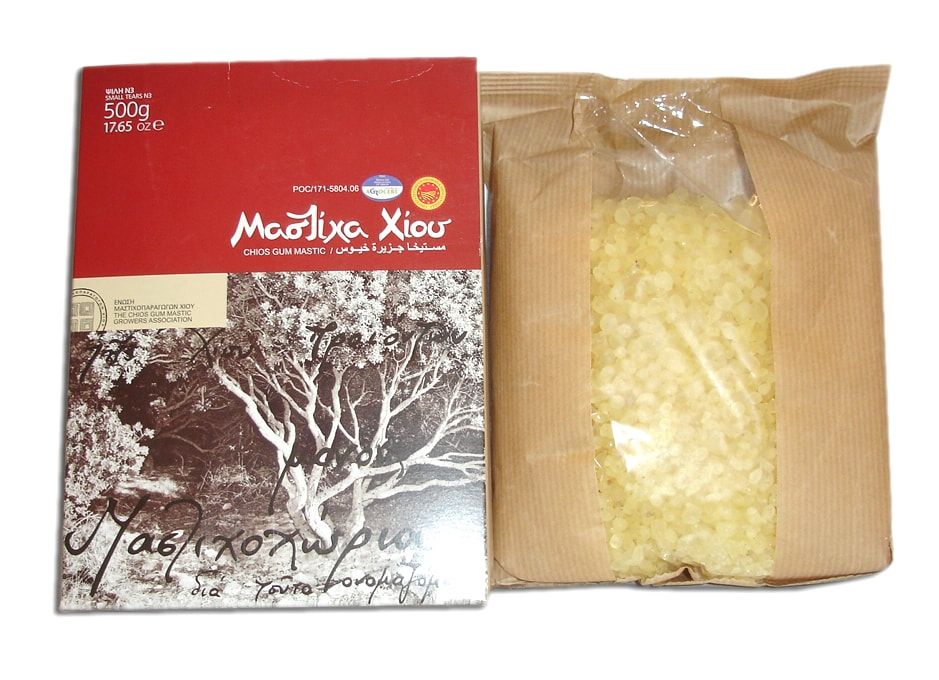 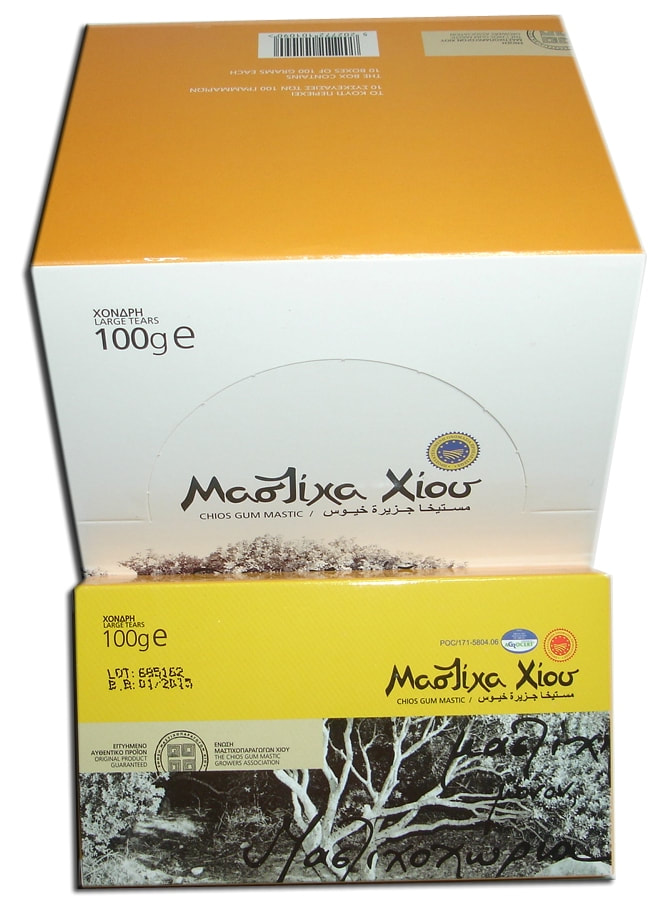 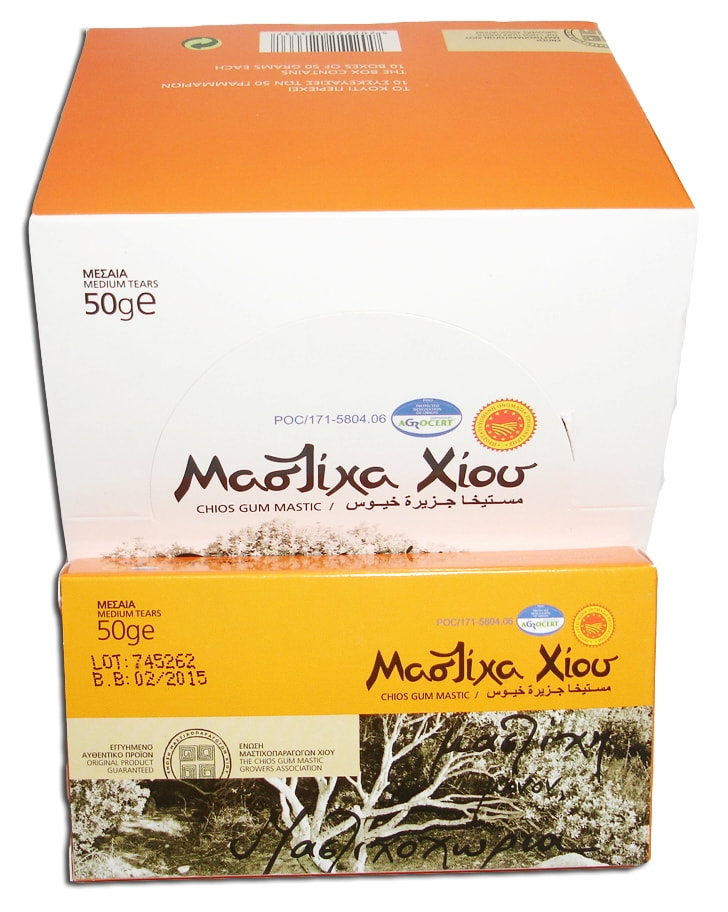 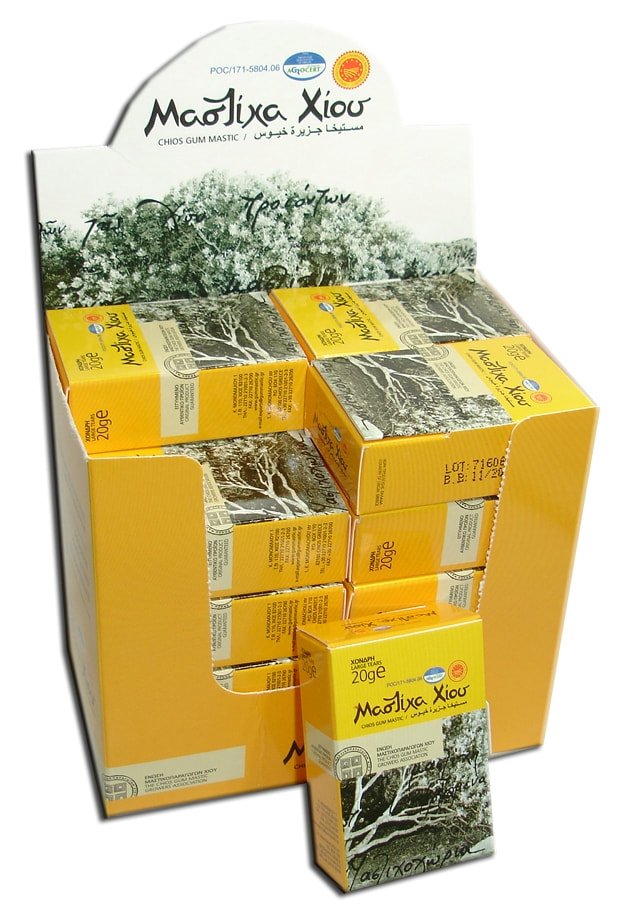 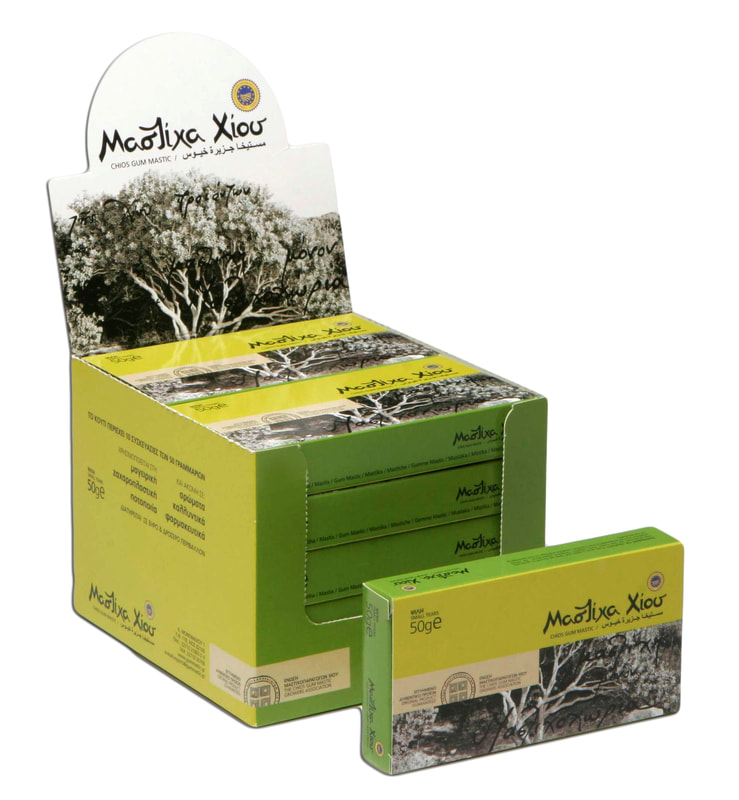 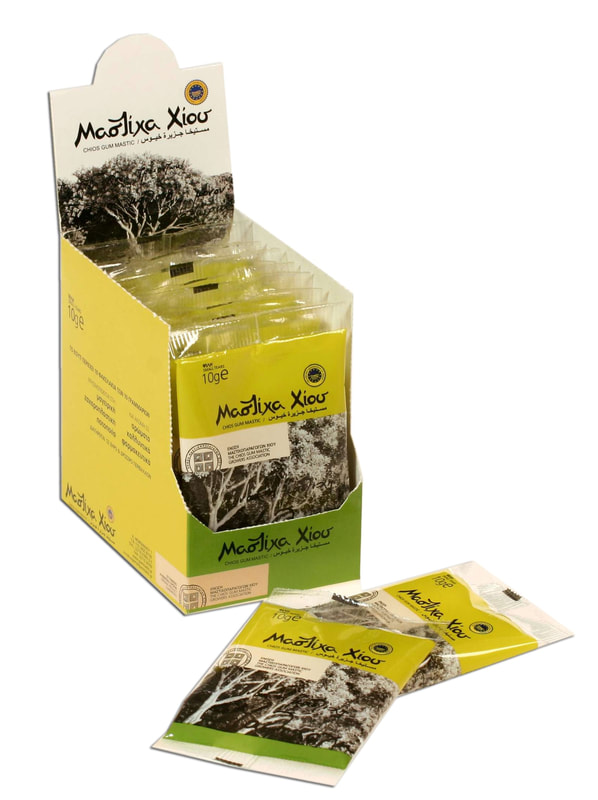 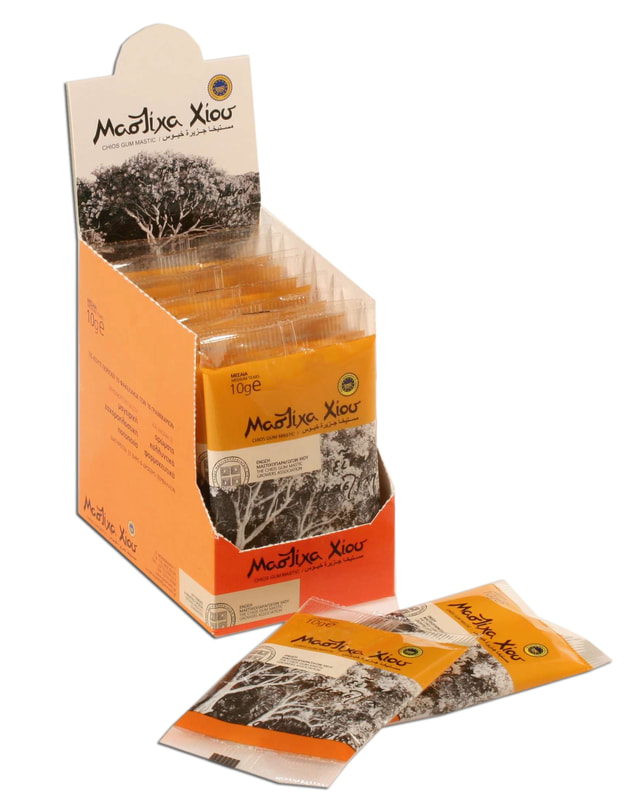 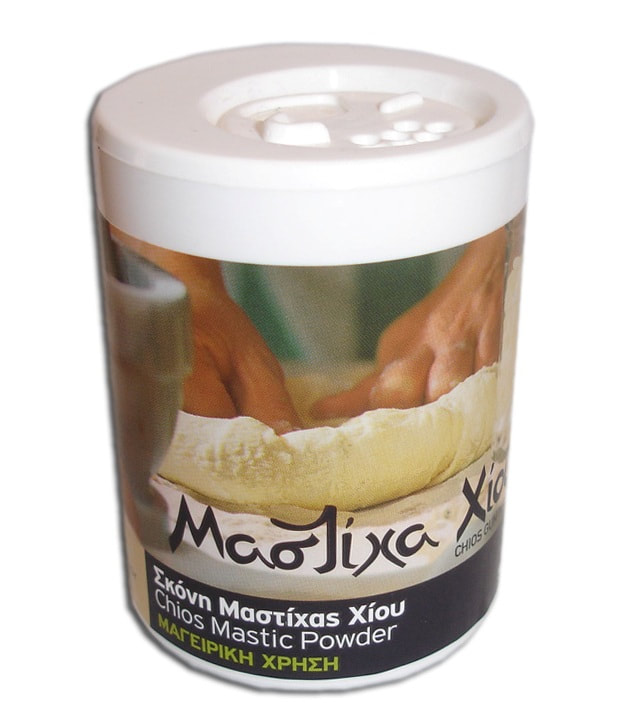 Chios Mastic powder for cooking 50g
Chios Mastiha is the name of a resinous sap produced from the mastic tree (Pistacia Lentiscus var. Chia). It is a natural, aromatic resin in teardrop shape, falling on the ground in drops from superficial scratches induced by cultivators on the tree’s trunk and main branches with sharp tools.  When its flow is constant, the drop is big and rather soft, while a non-constant flow gives a small but harder drop. As a result Mastiha is available in three types: Large, Medium and Small.

As it drips, this sap appears as a sticky and translucent liquid which, 15-20 days later, is solidified into irregular shapes influenced by the area’s weather conditions in summertime, that is intense drought and sunlight.
After being solidified, it has a crystal form, while its rather bitter taste quickly subsides to leave a distinctive aroma that really makes it unique. That solid product is then harvested and washed by mastic growers, giving us finally the natural Chios mastiha.

Ever since antiquity, Chios mastiha has been well known for its medicinal and pharmaceutical properties.
Nowadays, it has been gradually revealed by the scientific community, through accurate and scientifically acceptable methods based on laboratory research and clinical studies carried out by independent researchers in Greece and abroad, that natural Chios mastiha is gifted with unique beneficial and therapeutic properties, thus confirming what has been historically recorded over the past.

To be more precise, scientific evidence has confirmed mastiha’s beneficial action against disorders of the peptic system, its contribution to oral hygiene, its significant antimicrobial and anti-inflammatory action, as well as the fact that it constitutes a natural antioxidant agent. In addition to that, Chios mastiha contributes to wound healing and skin regeneration.

Since 1997, Chios mastiha has been identified as Protected Designation of Origin product ( PDO ), subject to No.123/1997 Regulation ( L0224/24-1-97 ) of European Union and has been registered in the relevant community list of the PDO products.
​
At a meeting of the Committee on herbal medicinal products (HMPC) to the European Medicines Agency (EMA), which took place in London on 7th of July 2015, was taken the decision to classify mastic of Chios to the category of traditional herbal medicines in two therapeutic indications: in mild dyspeptic disorders, for the symptomatic treatment of minor inflammations of the skin and as an aid in healing of minor wounds.